Click here to order online! (you will be redirected!) 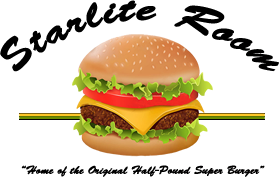 The Starlite Room is located in what was once the small town of Kenwood before it became part of Cedar Rapids.  The town of Kenwood had its own police department, fire department, school and church.  It also had a bakery, drug, grocery store, shoe repair shop and other establishments consistent with a small town.

The Starlite building was part of a U-shaped strip mall, which was the first of its kind in Cedar Rapids, dating back to the late 1940's.  In the mid-1990's, parts of the mall were removed to provide additional parking.

The strip mall that houses the Starlite Room was a fruit market prior to becoming a bar.

In the early years, transportation was quite different than it is today.  Trolley cars would bring people from downtown Cedar Rapids and make its turn back to Marion.  The trolley ran down the middle of 1st Avenue which was then a narrow, two-lane, hand-laid brick road.

When on the trolley, one was able to see the sights of Kenwood.

On the corner of 34th Street and 1st Avenue, which is now a small car lot, was a small grocery store serving Kenwood for years and then converted into Clark gasoline station.  The area from 35th street towards Marion was all beautiful countryside.  Where Lindale Mall presently sits was all farmland.  Where Home Depot now sits all the way to Highway 100 was Schover's Oak Farms with stables and riding horses.